from Tamil into English translated by Nadarajah Suseendran, Germany 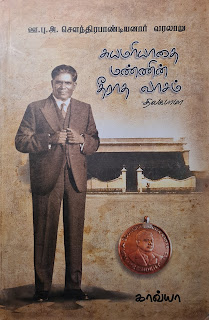 Apart from the struggles against the British Raj such as call for home rule, call for Indian nationalism, uprisings here and there and political formations against the colonial rule in major cities of India, the caste differences among the village population in the southern part of India intensified and aspirations arose equally, Particularly the Nadar community, which was described as Shanars and listed as traditional toddy-drawers by the colonial administration and suffered under ‘untouchability’ with other five communities was about to resist against the tyranny of this untouchablity. From 1809 onwards there were such uprisings in Travancore, Aruppukkottai, Kazhukumalai, Sivakasi and Madurai led by Nadars.

In 1917 the ‘South Indian People’s Association’ was formed against the Brahminical doctrines of varnashrama dharma and the domination of the Brahmins almost in most of the social aspects and particularly in political representation: This non-Brahmin movement was led by prominent leaders such as Thiyagaraja Chetty, Raja of Panagel, Munisamy Naidu, Raja of Poply, Periyar E.V.Ramasamy and T.P.Rajan. Due to the new constitutional reforms by Montagu-Chelmsford, members of the Legislative Council, under the new Reforms Act, would be both elected and nominated. It was introduced and implemented in the Madras presidency. The first elections under the new reforms act were in November 1920.

Albeit the call for political reforms and the political demands were issues in the cities among the upper level, there were strong caste and class differences in the southern villages. It took the worse forms. Nadars were the leading community struggled against the caste discrimination and for their rights. The other significant high ranking communities and Hindu high caste societies, particularly Maravars rose against the Nadars. The Nadar community suffered from the communal riots, spirals of violence, burning and looting. Especially after the temple- entering protest in Aruppukkottai, the Nadar community fought continually for their rights and demands, and filed cases at the courts tirelessly. Sometimes the cases took place in Great Britain due to the appeal by the Nadars in the supreme judicial institutions. We must bear in mind that this Nadar society suffered under several prohibitions in their areas. Even they had to fight for their wedding celebrations and for Temple entrance. For the proper political leadership and the strong representation in the politics the Nadar community attained in 1910 the association “Nadara Mahajana Sangam”. 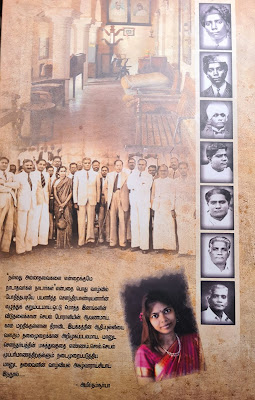 Due to the weakness of voting strength of Nadar community, they were not able to elect a representative and the Sangam urged the government to consider the nomination of Nadars to the Legislative Council. On the recommendation of the leader of the Justice party, the nomination of W.P.A.Soundrapandian Nadar (1893-1953) from Pattiveeranpatti was announced to the Legislative Council and he became the first Nadar to enter the Madras legislature. W.P.A. Soundrapandian came from the very wealthy, influential and prominent planter family of Pattiveeranpatti. Of course, his nomination helped the reputation of his family, previous two generations wide this family worked very hard for their then position, had always progressive thoughts in terms of social and political issues. His active participation in the Justice party, which was the only non-brahmin party confronted with that the congress party, his leading membership in the self-respect movement, rational thoughts and his works for the strength, unity and betterment of the Nadar community made him an eminent leader of this society. Periyar E. V. Ramaswamy, the non-Brahmin leader of social reform, founded the Self-Respect movement and selected Soundrapandian as the president of the newly formed movement. The first confer¬ence of the Self-Respect movement was held at Chengalpattu in 1929. Though this conference was a starting point for political phenomena, there were self-respect thoughts and activities from 1855 onwards among the Nadar communities to overcome from the caste discrimination: They were pioneers in 1.Building temples for their own worship 2..Building independent schools 3.Providing benefits and help to those who gave up toddy-tapping 4.The struggle against ‘untouchability’ and to develop and uplift self-respect not only for their own society itself but also for all the oppressed societies 5.Identified the political representation is basic to liberate and uplift the society besides the education and trade.

W.P.A. Soundrapandian was the first leader who used his political power and representation to turn all the above progressive points into deeds. He was nominated when he was 27 years old. He believed firmly that social freedom can bring national freedom.

1. Bus company owners opposed to the so-called ‘untouchable’ communities using their vehicles were frightened that he would cancel their licenses. 2. He arranged for scholarships to be awarded to female medical students. 3. If he were to be given the opportunity to raise only two questions, one would always be related to his community and the other of a general, wider, nature. 4. He travelled tirelessly and continuously, working for unity, strength and the upliftment of the community. 5. He successfully introduced a resolution for the abolishment of the punitive tax. (enforced due to the Nadar-Maravar-riots of 1918). 6.“No visits to those areas without schools” 7. He encouraged marriage without the chanting of purohits; “self-respect-marriages” and the remarriage of widows. 8. He played a significant role in trying to bring attention to the practice and custom, decreeing that “because of race or caste nobody should be refused entry to public places (including roads) and institutions”.

A sugar factory: W.P.A. Soundrapandian was instrumental in establishing a sugar factory in Pandiarajapuram Madurai in 1930. This was his master plan to link agriculture and the industries; create more opportunities for employment, develop managerial skills in big industries and, of course, the uplifting of society and development in general. Agriculture: W.P.A. Soundrapandian’s family was basically engaged in agriculture for generations. They owned thousands of acres of arable land. His family were planters of coffee on a large scale. Because of their long experiences in cultivation, W.P.A. Soundrapandian was able literally to taste the soil and find the suitable plant to cultivate on that land. He was also a pioneer in organizing cooperative societies. For example, he bought 600 acres to setup the Sugar factory and created Madura Orchards Limited, then sold the shares to the public in 1951. Under his management there were also about 3000 acres of land in Mysoor. So he was a successful businessman and at the same time he dedicated his life to society by his political leadership and progressive social activities. 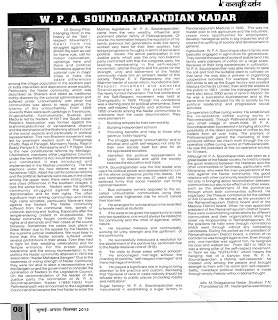 He established the co-operative coffee curing works in Pattiveeranpatti. Though Pattiveeranpatti was a very small village in south-India, W.P.A. Soundrapandian succeeded in bringing about the possibility of the direct purchase of coffee by the traders from all over India. The planters of Pattiveeranpatti gained the marketing of their products without too much work through the co-operative coffee curing works at Pattiveeranpatti. He was the president of this co-operative society for 10 years. Although W.P.A. Soundrapandian was seen as a great leader of the Nadar society, he tried to create the good relations between the Nadaras and the other communities of Tamilnadu, particularly with Maravaras, who were the main perpetrators of the riots against the Nadar community. His good relations with other community leaders helped him not only in bringing about reconciliation between communities but also to be effective in other areas, such as the abolishment of the punitive-tax, through which both communities suffered. He organized the Theeyar conference for the welfare of Adi-Diravidars. He served as the president of thr Ramanathapuram District board and of the Madurai District board.

When he was appointed president of the Ramanathapuram District board, there were overwhelming celebrations by different communities and their organizations along the street via Aruppukottai to Ramanathapuram. All the positions he held were through nominations which went through without any competing candidates. During his period as the president of Ramanathapuram Distric board, a motion of no-confidence was brought against him. Even though only one member was against him, he resigned his post and walked out. From 1921 to 1953 he was a strong pillar of the self-respect movement. In Tamil we say “VIZHUTHU” which means the hanging root of a banyan tree. W.P.A. Soundrapandian, a lifetime ‘self-respecter’, he created unity among the people and brought strength to them with his vision and ‘self-respect’. Sadly, nowadays political mobilization is made through empty rhetoric without rational thought.