The word missionary comes from the Latin meaning to send. For example, the Buddha was Indian, and Indian missionaries were sent to bring Buddhism to Sri Lanka. But now, given almost half a millennium of dominance and proselytization, the word "missionary" is usually associated with Christianity and the West. Missionaries are not in favour. As I write (February 2010), about ten American missionaries have been expelled from Haiti for, allegedly, attempting to abduct children from that earthquake devastated country. In Sri Lanka, there is concern and indignation at the "unlawful" (as distinct from lawful?) conversion of Buddhists to Christianity. Going back in time, there is the role, often unfortunate, played by missionaries during the years of Western imperialism.

It has been claimed that, in return for protection afforded by the imperial state, Christian missionaries emphasised meekness, acceptance, the Biblical "turning of the other cheek", and directed the thoughts of the "natives" to wealth, dignity and freedom in the next world. Alan Bott, in his ‘Our Fathers’ writes that the British East African Company "reaped" (financial, material) profit where Livingstone had "sown" the Gospel. V. G. Kiernan (‘The Lords of Human Kind’) states that missionaries were in close league with European governments, and were advocates of annexation. The priest in Mongo Beti’s novel, ‘The Poor Christ of Bomba’, seeing the ambiguity of his position, decides to return to France: he’ll come back when Africa is free. (Asian Buddhist monks working in the West today encounter no hostility.) Christine Bolt (‘Victorian Attitudes to Race’) observes that the nineteenth-century European missionary believed that Christianity was divinely ordained to conquer and save "savage" peoples. However, the missionary’s sense of spiritual superiority easily turned into racial superiority, and cultural arrogance. Bolt quotes from the ‘Church Missionary Intelligencer’ of 1850: Once a people are defeated in war, Christianity best consolidates the conquest. Kipling wrote the poem, ‘The White Man’s Burden’, to urge the United States to conquer and occupy the Philippines. The Philipinos, like other conquered "natives", were but "Half devil and half child" who had to be dragged – for their benefit – from darkness into the light of Christianity and Western civilization. Even in the twentieth century, during the period of India’s struggle for independence, some British clergymen argued that God Himself had given India to Britain, and to abandon (sic) the land and people would be a betrayal of a sacred trust.

Amartya Sen (among others) has pointed out that identity is multiple. To affix a label – Sinhalese, Tamil, Christian, Moslem – is to isolate and give importance to just one aspect. It simplifies and, therefore, falsifies, a complex reality. The label "missionary" disregards and suppresses what is contrary, even contradictory. The present writer paid tribute to Dr R. L. Hayman and the Rev A. J. Foster in an article on St Thomas’ College, Gurutalawa (‘Sunday Island’, 5 July 2009). These two educationalists were held in affection and esteem not only by Christians but also by Buddhists and Hindus; not only when they were pupils but in later life, as mature adults possessed of greater awareness, knowledge and better judgement. On the lines of "bad news is good news", it is those missionaries who were "racially", socially and spiritually arrogant, and who went along with the imperial project who have tended to remain in memory. Altering Shakespeare’s words, one can say that the evil done by some lives on after them, while the good done by others is buried with their bones. A strong corrective of the negative image of Christian missionaries can be found in Thiru Arumugam’s ‘Nineteenth Century American Medical Missionaries in Jaffna, Ceylon: with special reference to Samuel Fisk Green’ (South Asian Studies Centre, Sydney, 2009).

The American Board of Commissioners for Foreign Missions (ABCFM) was formed in 1810. The aim was, in the process of curing the body, to convert the soul to Christianity: those in sickness and pain are grateful for help, and susceptible to influence. The body was healed so that the soul might be saved (Arumugam, p. 31). "Extracts from the Bible were printed on the reverse side of the patient’s (sic) tickets and they had to read it out (or have it read to them) before treatment commenced" (p. 56). However, the missionaries met with little success where conversion was concerned: see, for example, pages 67 & 68. So it is not surprising that (according to statistics available to me), the percentage of Christians at independence was about 9% and now is perhaps down to 7%.

To read a book is to enter into, and inhabit, the world and times it re-presents. Here, in Arumugam’s work, we encounter the human beings behind the label "missionary". Prior to the opening of the Suez Canal (1869), the voyage from America, non-stop, took between four and five months. To send a letter from Ceylon and receive a reply meant a lapse of eight to ten months. Missionaries were expected to serve until they retired or passed away: leaving on missionary work often meant saying goodbye forever to loved family and friends, familiar environment and culture. It demanded conviction and commitment; called for endurance and quiet heroism. Miss Elizabeth Agnew, Principal of Uduvil Girls’ School, served from 1840 until her death forty-three years later. During this period, she never visited America, saying she was too busy to go on holiday. Having taught so many girls, she was known as "the mother of a thousand daughters" (p. 27). Dr Isabella Curr, from Scotland, joined the American Christian Mission, and worked at hospitals in Manipay and Inuvil for nearly forty years (p. 140).

It was not only the missionaries who fell ill and died, but their infants and children: "in less than eighteen months, we been (sic) called to part with three children [...] May our loss be made up by spiritual children" (p. 30). Harriet married Samuel Newell at the age of seventeen, aware of the life, difficulties and dangers that awaited her. Four months after leaving America, the Newells reached Calcutta (June 1812). However, the British East India Company declared them unwanted and ordered them to return to America. The Newells took the earliest ship available, one that was sailing from India to Mauritius. During the voyage, Harriet gave birth but the infant died four days later. Harriet too fell ill, and though treated in Mauritius, passed away, never having set foot in Ceylon, but affirming the value of, and her faith in, religion (p. 5). In the expulsion of the Newells, we have an insight into imperial assumptions and attitudes. Britain looked upon its overseas territory and peoples as belonging rightfully to her: the Americans would be better employed in converting "their" own heathen.

In Jaffna, the missionaries found that widespread poverty and inadequate shelter were major causes of disease and illness (p. 21). They devoted themselves totally to their work. In times of epidemics, such as cholera (p. 32), they "worked among the sick, bathing the sufferers, burying their dead, and doing what they could to relieve distress", disregarding danger to themselves. (Those of a certain age will recall the difference the presence of Western nuns and sisters made to hospital wards in Sri Lanka.)

Among the charges levelled against imperialism, one is that education was deliberately kept rudimentary, sufficient for the natives to help Britain to administer the country. Another is that missionaries were condescending in ‘racial’ and cultural terms. Neither applies to these missionaries. One writes home that there are among the people of Jaffna those of intelligence such that, "if they had equal advantages with the young men in our country, they no doubt would be an honour to any nation" (p. 28). As for deliberately limiting knowledge, their aim was to "teach [...] the sciences usually studied in the Colleges of Europe and America" (p. 42). Electricity was a part of the curriculum in Jaffna "only a decade or so after Michael Faraday discovered how to create current flow, and several decades before Edison invented the incandescent lamp" (ibid). Though economically neglected and poor, Jaffna then had a general hospital that would have done Colombo proud.

What preoccupied "Ceylonese" around the mid-1950s was the so-called language issue, and the cry of "Sinhala only". A hundred years earlier, it was decided that medical education in Jaffna would be conducted only in Tamil, but the motivation for the "Tamilizing [of] western medicine" (p. 96) was not a racist nationalism: it was found that doctors instructed and trained in English left the area (and the notion of altruist service) for better-paid posts in other parts of the Island. Dr Green’s concern was that the Tamils trained by the mission settle in their own respective villages, and be of service to the poor. Most remarkably, Dr Green did not want to see students become "denationalized", giving up the turban for a hat, and vegetarianism for "carnivorism" (p. 93). His wish was to see Christian Tamils - not Europeanised Tamils (ibid).

Dr. Green who had mastered Tamil, translated many Western medical text-books, including the most famous of them, ‘Gray’s Anatomy’. Often, Tamil not having the equivalent medical terms, Dr Green set about coining words. A literal translation, he wrote, is useless (p.80): "It is better to devise one’s own plan, and compile freely from many authors, taking their ideas only [...] select a well planned elementary treatise and use this as a basis [...]; which may prove to be a compilation, translation, and original work combined; interleave it, add, erase, and transpose matter, remodel sentences, phrases and figures so as to adapt the book to the language of the people [...] " Free of cultural arrogance (often, based on ignorance), Dr Green urged that "the medical missionary should investigate the native systems of medicine" (p. 80); associate with, and learn from, native doctors.

I conclude with an entry that has to do with Colombo, rather than Jaffna. Mary Irwin, ostensibly single, arrived in 1897 to take up work as a doctor. It then transpired that, while in America, she had married Mr S. C. K. Rutnam, her tutor in Tamil. The discovery of the marriage created displeasure in the missionary hierarchy, and the Rutnams moved to Colombo where Mrs Rutnam became the first female obstetrician and gynaecologist in the capital (p. 140). She was active in groups such as the Ceylon Women’s Union; campaigned for maternal and child health-care, and wrote school text-books on health and hygiene. She was elected the first woman member of the Colombo Municipal Council and, in 1958, was awarded the Ramon Magsaysay international award for public service: "Jaffna’s loss was Colombo’s gain" (p. 140).

As with members of all religions, there are some who, in the name of their religion, act in ways contrary to the teachings of that religion (hence "unchristian" above) while others live by, and exemplify, the highest and noblest ideals of their faith. 0ne realizes, yet again, that truth, rather than being single and simple, is often multiple and complex. 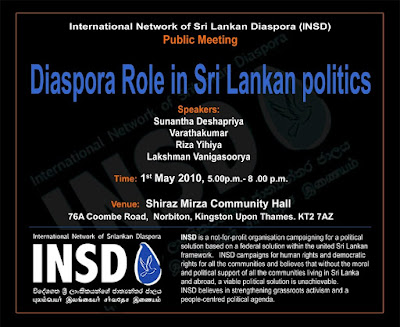 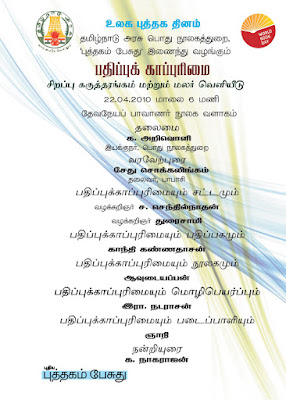 Vote of Thanks:
K Nagarajan 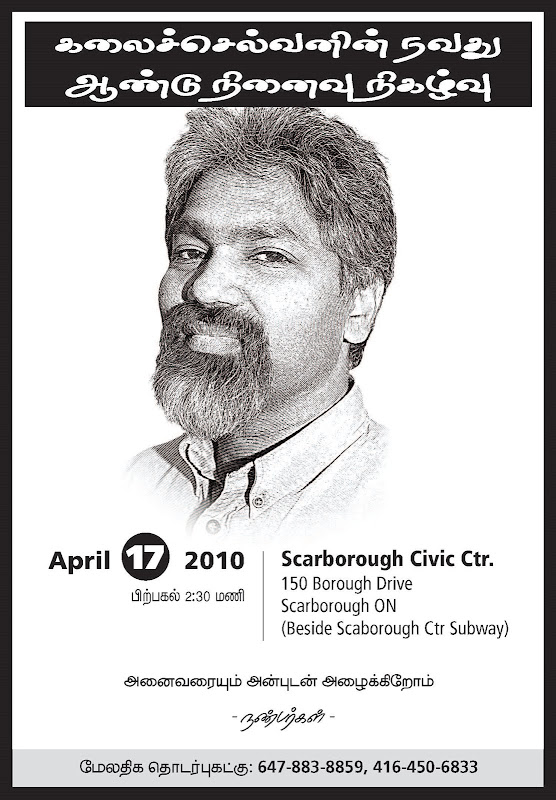