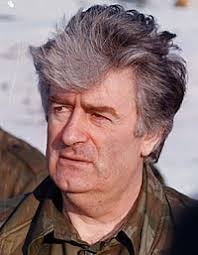 “Black July”. Extract from
“Sri Lanka: Reign of Anomy: An Essay on the Ethnic Conflict”
by Charles Ponnuthurai Sarvan

On 19 July, that is, five days before the incident in Jaffna claimed as the cause (and justification) of “Black July”, President J. R. Jayawardene issued an emergency order imposing press censorship. The Public Security Act permitted the security forces to bury or cremate bodies without post-mortem examination or judicial inquiry.

In the modern history of the Tamils of Sri Lanka, “Black July” is the most significant and painful event – one cautiously adds, to date. On the part of the Sinhalese, the response is various, among them being that of suppression or repression, leading to a wished and willed amnesia. (The term "suppression", in a broad sense, was used by Sigmund Freud to describe a conscious mechanism intended to eliminate undesirable psychical content from consciousness. According to Freud, the difference between suppression and repression lies in the fact that the latter defence-mechanism is unconscious and under its influence repressed content becomes or remains unconscious.) Other responses include that of minimisation (“It wasn’t really that bad” – see D.C.R.A. Goonetilleke below) or self-justification, and a ‘blame the victim’ attitude: “It’s their fault. They asked for it”; even to
“They deserved what they got”. I must add that I know Tamils who were personally caught up in Black July or are closely related to those who were, and yet have “forgotten” the event. Perhaps, it is too painful and, in some ways, embarrassing? Perhaps, they want to put it aside and get on with their lives?

Minoli Salgado, in Writing Sri Lanka, quotes Professor D C R A Goonetilleke as stating that what was done to the Tamils in 1983 was “no Holocaust” (see, Salgado, Note 105, p. 179). There are no official statistics but the number of Tamils killed is placed between two and three thousand. It is therefore terminologically inaccurate to describe the pogrom as a holocaust, and Tamils who do so, moved by emotion, harm the case they attempt to make by over-stating it. A holocaust is determined by intention (extermination) and, following from that, also by number. Of course, one can quote Donne and say that any one’s death diminishes us because we are (or ought to be) involved in humanity; one can claim that what makes for the heinous is not number but the nature of the action. Still “holocaust” and “genocide” remain inappropriate terms for what happened in Sri Lanka, and Goonetilleke, though lacking in sympathy, is quite correct.

Michael Roberts has written extensively on Sri Lanka, combining thorough scholarship and academic detachment, yet heeding Yeats’ earnest wish that he be saved from thoughts thought in the mind alone, that is, without compassion (Yeats: ‘A Prayer For Old Age’). In his writing on July ’83, Roberts uses words such as “gristly” and “beastly”. Since what happened took place also in Colombo, there were several foreign, impartial (although horrified, unbelieving) witnesses. It was revolting in detail – pregnant women disembowelled; women gang-raped in public; whole families set alight alive - and distressing in effect. Almost every Sinhalese family known to me personally has a story to tell of help rendered or protection afforded to “terrorised” Tamils. But there was no sense of national revulsion, no collective protest; no public demand for inquiry, justice and compensation. It was all blamed on a few unruly elements. In contrast, Germany has publicly, almost obsessively, accepted culpability for its actions during World War 11; paid compensation, released self-incriminating documents. (As an Armenian said to Jewish writer, Yossi Klein Halevi, “Your’re lucky it was the Germans who killed you. They are a civilized people. They know how to apologize.” The New York Review of Books, 10 May 2007, p. 37). The government of Sri Lanka expressed no regret because it felt none. On the contrary,
President Jayawardene said he was not worried about the opinion of the Jaffna people. “The more you put pressure in the north, the happier the Sinhalese people will be here. Really, if I starve the Tamils out, the Sinhala people will be happy.” By way of contrast, in a different
context, Hannah Arendt admonished those of her fellow Jews who were “racist” and ready to terrorise the Palestinians: “Thou shall not kill, not even Arab women and children”. (See Elisabeth Young-Bruehl, Hannah Arendt: For Love of the World, Yale University Press, 2004, p. 291.)

Focusing on the massacre that took place at Welikade prison on the 25th and 27th of July, fifty-three Tamils in state custody were murdered, the guards having opened the cells and given the mob free access to the prisoners. Among this hapless group was “Kuttimani” of TELO, found guilty of murder committed in the course of a politically-motivated robbery.
Asked by the court, as is customary before the death sentence is passed, if he had anything to say, Kuttimani replied he wished to donate his eyes so that, one day, they would see an
independent Tamil homeland. This unusual statement was widely publicised, and when the mob dragged him out, they taunted, “Are these the eyes that wanted to see Tamil freedom?”,
gouged them out, and then killed him.

A character in Romesh Gunesekera’s novel, The Match, asks, “How can they do it? What could make a person throw kerosene over another human being and set fire to him? Watch his skin crinkle and burn? How could they hear the screams, see the flames wrap around a writhing man, smell the burning flesh, and then do it again?” (London: Bloomsbury, 2006, p. 154). Basil Fernando wrote a poem, ‘Yet another incident in July 1983’, based on an incident witnessed by one of his Sinhalese lawyer friends at Narahenpita, close to the Labour Secretariat. A car carrying parents and their two children, aged about four and five, is stopped; Tamil identity is established, and petrol poured over the vehicle. Then someone opens the car door and takes away the two children, crying and resisting. The vehicle is set alight. Suddenly, the father, already on fire, steps out, bends down and takes his two children.


Michael Robers, from whose Exploring Confrontation (1994) the above is taken, comments that his interest is in the lucidity of the indictment expressed by that unknown Tamil father: his courage and “incisive clarity of comment has etched its imprint on my soul” (p. 322).

Returning to the dismissal by Professor D. C. R. A. Goonetilleke, what remains in Tamil memory and heart is not the number of those killed but the horrific nature of the attack. Tamils are puzzled at the intensity of the hatred and, following, the ready willingness to commit appalling atrocity. Tiger atrocities being post-1983, Tamils have asked, “What have we done to excite and deserve such intense and venomous animosity?” (In Coetzee’s prize-winning novel, Disgrace, the daughter, victim of vicious gang-rape, asks her father, “But why did they hate me so? I had never set eyes on them”.) In another work of his, Michael Roberts discusses various theories to explain the horrific violence which included the dismemberment of corpses. According to one possible explanation, the Tamil has come to represent the demon and, therefore, like the demon, must be tortured and mutilated; made afraid and brought under control. The mal-treatment of the body (before, during or after death) has an effect on those related to the person: “In effect, the anxieties of kinfolk will be multiplied not only in the immediate aftermath, but also throughout their life span because the cause of specific afflictions could be the wandering ancestor spirit of mutilated kin. In brief, the dismemberment of a body maximises the ripple of chaos… over a considerable span of time” (Roberts, Sinhala Consciousness, p. 152). The belief in demons and spirits takes us back to The Mahavamsa; to superstition and magic, to belief in spells and exorcism which have penetrated, permeated and contaminated Buddhism. The placing of dead or dying bodies before the Buddha statue is a recursion to primitive times when some tribes offered human sacrifice to please and placate an atavistic and bloodthirsty god. (One notes that, etymologically, the word “holocaust” comes from burnt offering, that is, sacrificial flesh offered to propitiate and please a god or spirit.)

Narayan Swamy’s study of the LTTE leader, Inside An Elusive Mind, states that prior to 1983 the Tigers were little known and had no popular base, not even in Jaffna. (Swamy is no supporter of the Tigers, and the book’s cover describes his work as a profile of the world’s
“most ruthless” leader.) Tiger numbers prior to 1983 have been variously placed between twenty and thirty; at a maximum below fifty. All this changed after – and more importantly,
because – of that fateful year, a fact that must be borne in mind if one is to make sense of subsequent development, of the violence and appalling human tragedy.
sent by St unter 10.7.08 கருத்துகள் இல்லை: 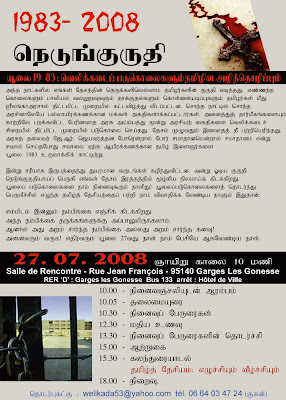